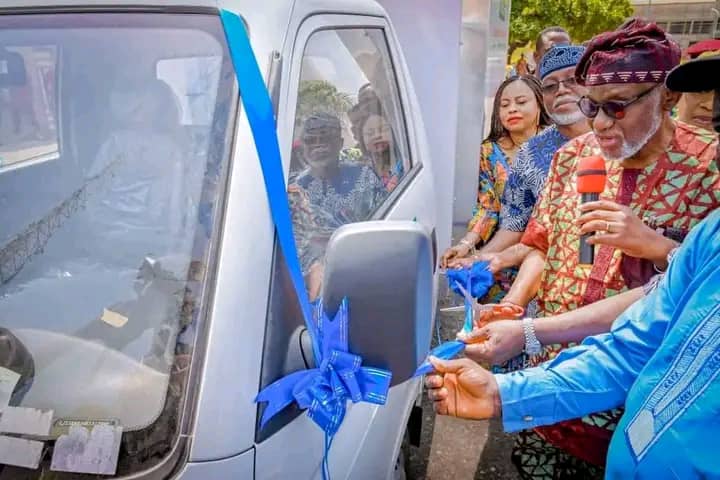 Ondo State Governor, Arakunrin Oluwarotimi Akeredolu,SAN, CON on Friday inaugurated a new Refrigerated Van for the use of meat dealers under the auspices of Butchers Association in the state.

Governor Akeredolu handed-over the new Refrigerated Van to the Chairman of the Butcher Association at the Governor’s Park, Governor’s Office, Akure.

The donated Refrigerated Van is part of the modern meat haulage protocols for hygiene, distribution and delivery of refrigerated meat in the country.

Governor Akeredolu informed the people that the Van was donated by the Federal Government through the State.

He disclosed that there were conditions that were met by the State before the Van was released by the Federal Government.

The Governor commended the Federal Government for its numerous efforts to improve the lives of Nigerians.

According to Governor Akeredolu, the APC-led Federal Government has made remarkable marks and blazed the trail in its various developmental efforts.

“Look at the railway, we have never had this developed railway before. The Second Niger-Bridge, this APC -led Federal Government saw that to fruition.

The Governor thanked the Butchers’ Association for their support and cooperation in the State, adding that their consistency over the years is commendable.

Earlier, the Special Adviser to the Governor on Public and Inter-governmental Relations, Mrs Bunmi Ademosu noted that the Governor had earlier donated a bus to the Association.

She revealed that the Butchers’ Association in the State has been helping with the distribution of meats for the School Feeding program across the Local Government Areas.

“This has come now from the Federal Ministry of Agriculture and Rural Development in conjunction with Ministry of Humanitarian Affairs to enable the Butchers have their meats distributed freshly and well preserved.

“This, they have received from the Federal Government through the State and it is in recognition of what you (Governor Akeredolu) have done for them. They are one of the luckiest ones to have it.” She said.

The Chairman of the Butchers Association in the State, Mr. Sikiru Ayinde admitted that it is the first time the Association would enjoy government presence in the State.

He thanked the Governor for his support, while assuring that members of the Association will always show appreciation by voting massively for the APC at all elections.