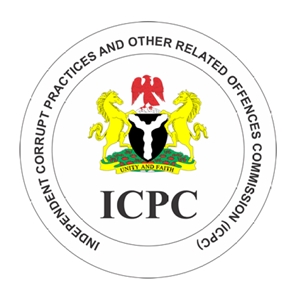 By Matthew Ogune, Abuja
The Chairman of the Independent Corrupt Practices and Other Related Offences Commission (ICPC), Professor Bolaji Owasanoye, has claimed that the looting by politically exposed persons in the country represents less than 30 percent of the losses of capital in the country.

ICPC Spokesperson, Azuka Ogugua quoted Owasanoye to have stated this in Lagos at a media roundtable on the National Ethics and Integrity Policy.

According to Ogugua, the ICPC Chair described illicit financial flows as the most egregious form of corruption in Nigeria.

In his words: ‘’I am aware that the general perception is that looting by politically exposed persons is the most egregious, but I have news for you, it is not. It represents less than 30% of the loses of capital in the developing countries, including Nigeria. A lot of money is lost through illicit financial flows.’’

ICPC, he said, is looking at Illicit financial flows, because “…no government, especially in the developing countries will ever be able to fulfill its programmes or not depend on loans for development assistants unless it is able to keep within its economy revenue that is generated therein.’’

Regarding the report of the National Corruption Index (NCI), which focused on grand corruption, the ICPC boss said that ‘’the survey that we published has been regrettably reported by some section of the media as suggesting that judges collected bribes. Nothing can be farther from the truth… we interviewed judges, we interviewed lawyers and many responded and said, ‘we were offered’.

The justice sector, he said, ‘’…is not only judges, there are registrars, there are court clerks… we aggregate everything, but many of the (media) reports … zeroed in on the judges. Some even suggested that the judges collected, we never said so’.’

The NCI report, he advised, should be well interrogated.

‘’It is the politicians who offered the bribes through different means, either through their lawyers, or sometimes directly to the judges, but the judges didn’t tell us that they collected the bribes…

’…the figure spiked over the three years period (2018-2020) because of the high stake area of focus, which is the election petition, where politicians desperate for power are ready to offer anything in order to take power’’.

On ICPC’s prevention mandate, the chairman said, ‘’we have done system study and reviews. Last year, we focused a lot on budget, with regard to personnel and capital. This year, we have done the same thing, but in addition, we look intensely at Open Treasury Portal. Some of the things, which we have found that are consequently being further interrogated and investigated include disbursements into the accounts of civil servants that we felt require explanations and the quantum of what we saw.

“Related to that, is the deployment of Ethics and Integrity Compliance Scorecard, which is a peer rating mechanism. It helps to administer on the agencies of government and to predict somewhat whether an MDA is an accident waiting to happen as far as corruption is concern.’’

The ICPC boss revealed that, ‘’one of the things we try to do also is to put some light into the budget and appropriations, given our own limited human and financial resources. When we look at the Zonal Intervention Programmes, for example, we look at the sector with the biggest chunk of money, that is what we want to go after, and it is deliberate for value for money.’’

He pointed out that despite the achievements recorded by the Commission; it is still bedeviled with challenges of inadequate human capital and funding, weaknesses in the justice system, and so on.

Speaking on National Ethics and Integrity Policy (NEIP), which was midwifed by the Commission in collaboration with the National Orientation Agency (NOA), the Director-General (NOA), Dr. Garba Abari, stated that the policy was aimed at addressing the issue of values, ethics and integrity in the country.

He further said that the aim of the policy was to engage with the citizens and let them take ownership of the policy.

While explaining the next steps in the implementation of the policy and consequence management template, Ogugua informed the participants on plans to simplify the policy, translate it into various Nigerian languages, engage stakeholders and ensure that the anti-corruption messages were broadcast on social media as well as periodic monitoring and review of the policy.

The consultant to the event, Mr. Tajudeen Kareem pledged that going forward the media will ensure that it collaborates with the ICPC and the NOA in the implementation of the policy as well as in the fight against corruption.

He also expressed appreciation to ICPC for convening the laudable interactive session and for giving them the opportunity to contribute their quota in the fight against corruption.