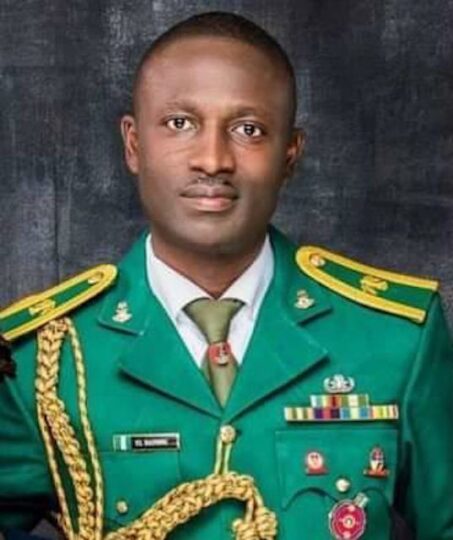 According to reports, his body was found on Tuesday evening, hours after he was captured by bandits.

The abductors reportedly demanded N200 million to set him free.

Datong who was from Pankshin in Plateau state, was born 4 January, 1978.

One of the photographs circulating in social media showed the officer with his pregnant wife.

The security breach of the Nigerian Defence Academy triggered shock across the nation , with people wondering if any one is really safe if bandits could operate so freely inside an elite military institution.

A statement sent by Jajira said:

“The security architecture of the Nigerian Defence Academy was compromised early this morning by unknown gunmen who gained access into the residential area within the Academy in Afaka. During the unfortunate incident, we lost two personnel and one was abducted.

“The Academy in collaboration with the 1Division Nigerian Army and Air Training Command as well as other security agencies in Kaduna state has since commenced pursuit of the unknown gunmen within the general area with a view to tracking them and rescue the abducted personnel.

“The NDA community and Cadets are safe in the Academy. We assure the general public that these unknown gunmen would soon be apprehended and the abducted personnel rescued.”

Speaker of Kaduna State House of Assembly, Alhaji Yusuf Zailani, has described the invasion as an assault on the country’s territorial integrity

Zailani, who stated this in a statement issued by his Special Adviser on Media and Publicity, Ibrahim Danfulani, in Kaduna, on Tuesday, said that the incident must be treated with all seriousness and thoroughly investigated.

The speaker described NDA as the premier training citadel for members of Nigeria’s armed forces and pride to the country and Africa.

He said the attack on such an institution was unacceptable and must be investigated by the military hierarchy.

“It is disheartening and unfortunate for such an attack to have taken place, catching those in charge of its internal security off-guard,” Zailani said.

While commending security personnel for making efforts to decimate bandits and insurgents nationwide, he said that they should not let the NDA incident demoralise them.

“I sincerely commiserate with the families of those who lost their lives.

“I am, however, pleased that the NDA authorities have given assurance that the assailants are being trailed and that they will be apprehended,” the speaker added.

Okowa In Minna To Celebrate IBB At 80

2023: Wike Heads To Court, Stops PDP From Suspending, Expelling Him