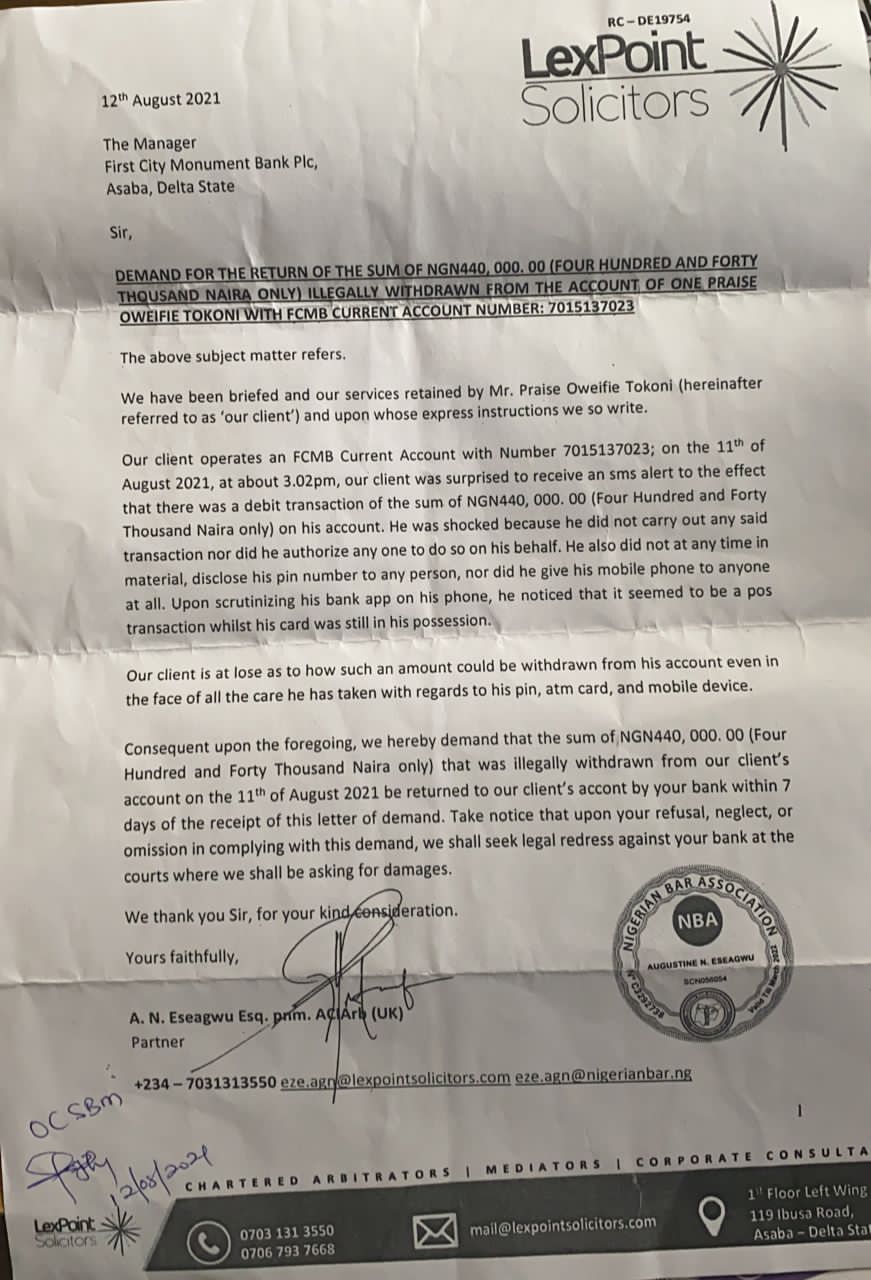 A customer banking with the First City Monument Bank (FCMB), Mr. Praise Oweifie Tokoni has demanded that FCMB refund the sum of Four Hundred and Forty Thousand Naira (#440,000.00) illegally deducted from his bank account in seven (7) days or face prosecution from his lawyers.

According to the letter from Mr. Tokoni’s lawyers, A.N. Eseagwu Esq of LexPoint Solicitors, our client had been very careful in keeping his ATM card, PIN and other banking documents safe and wondered how his money could have been withdrawn without disclosing his personal information to anybody.

The lawyers also said that when checked, the client had discovered that the money was deducted from a POS even when his ATM card was in his pocket at home.

Meanwhile, the client through his lawyers had threatened court action against FCMB if it failed to return the said illegally withdrawn amount to his bank account in seven (7) days.

Their words, “Consequent upon the foregoing, we hereby demand that the sum of Four Hundred and Forty Thousand Naira (#440,000.00) that was illegally withdrawn from our client’s account on the 11th of August, 2021, be returned to our client’s account by your bank within seven (7) days of the receipt of this letter of demand. Take notice that upon your refusal, neglect or omission in complying with this demand, we shall seek legal redress against your bank at the courts where we shall be asking for damages.

Perhaps, it is hoped that with this kind of bold step taken by Mr. Tokoni to reclaim his money, the FCMB and peradventure most Nigerian banks should put mechanisms and proactive measures in place towards safeguarding customers’ deposits. This is because the news of fraudulent withdrawals from customers’ accounts without their knowledge is becoming rampant and something urgent and punitive needs to be done to reduce mistrust of the banking system.

BREAKING: First Nigerian President Of The Baptist Theological Seminary In Ogbomoso Is Dead