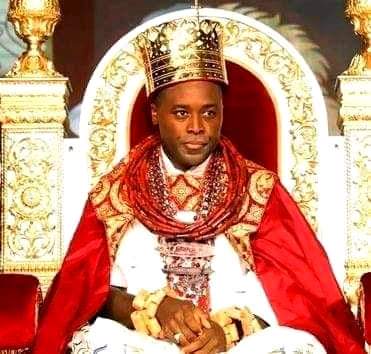 His Royal Majesty, Ogiame Atuwatse III, Olu of Warri, ascended the prestigious throne of his forefathers as the 21st monarch of Iwereland, in Warri South Local Government Area, a monarchy pioneered by Prince Ginuwa of the ancient Benin Kingdom.

Thus, Ogiame Atuwatse III, automatically becomes a member of the National Council of Traditional Rulers, as announced by HRM Ojaja II, Oni of Ife, the most powerful king in Yoruba nation.

The coronation took place on Saturday August 21, 2021 at the Itsekiris’ ancestral home of Ode-Itsekiri, in splendor and colourful display of rich culture of Iwere people, thus put paid to the wide spread speculations that the coronation may not take place due to pending legal tussle instigated by a minority group within the ruling class.

Historians, particularly of the Yoruba and Benin extractions postulated at diverse times that the Itsekiri people migrated through the riverine routes from Ijebu Ode in Ogun State and Ikare in Ondo State; settled at Ode-Itsekiri and environ without a monarch, before Prince Ginuwa accompanied by seventy first sons of Benin Chiefs established Itsekiri Monarchy, originally known as Olu of Itsekiri, and later Olu of Warri.

This historical fact may have accounted for the reason why most Itsekiri names are similar to or the same as Yoruba names. It is on record that the Yoruba sage, Chief Obafemi Awolowo of blessed memory and other leaders of Oduduwa nation maintained strong cultural and political relationships with Itsekiri nation, particularly with Chief Alfred and O.N Rewane and other prominent Itsekiri sons and daughters.

Another fact that requires emphasis is that of Yoruba and Benin ancient relationship. The link between Oduduwa and Benin is very strong, such that you cannot separate them as the Edit of 1979 tend to do, as regard Itsekiri Monarchy. It is truly difficult to separate Benin from Yoruba, they are strongly intertwined.

As you can see, Ogun State was well represented by the former President of Nigeria, His Excellency, Chief Olusegun Obasanjo, he knelt down in absolute loyalty while discussing with HRM Ogiame Atuwatse III, during the thanksgiving service on Sunday.

More importantly, the Oduduwa nation was ably represented by HRM Ojaja II, Oni of Ife. It goes to show that Itsekiri nation cannot through the Edit of 1979, yank the solid relationship it shared several centuries with Oduduwa nation.

And because Itsekiri Monarchy is traced to Benin Kingdom, it will not pass commonsense test to say that Yoruba blood in a Crown Prince should disqualify him from ascending the throne. Therefore, it is trite to assert that there is an unbroken triangular relationship between Benin Kingdom, Oduduwa nation and Itsekiri nation, such that the Edit of 1979, will not be able to separate them, going forward.

It follows that Itsekiris were never and cannot be Edo people of the ancient Benin Kingdom by tribe. Their deep rooted connection with Benin Kingdom originated from the rule of Prince Ginuwa, the first King of Itsekiri nation. And because the discrimination contained in the Edit of 1979, was not initiated by Prince Ginuwa, the sponsors of the Edit obviously did not represent the interest of the majority of Itsekiri people.

And as Yoruba people of the Ikare and Ijebu-Ode extractions, one wonder why an edict of 1979, was crafted to exclude any Itsekiri crown prince whose mother hails from Yoruba race from ascending the royal throne.
As my friend, Prince Yemi Emiko puts it;

“Itsekiri People hail from Ijebu-Ode in Ogun State and Ikare in Ondo State. It is therefore laughable for any true Itsekiri son or daughter to say that a Crown Prince whose mother is from Yoruba cannot ascend the royal throne.

“HRM Ogiame Atuwatse III, emerged without any controversy and those fomenting trouble should revert to historical evolution of Itsekiri Monarchy, and nothing else. They should embrace peace because our new king is willing and ready to unite Itsekiri nation, for greater heights.

“We are happy with the emergence of HRM Atuwatse III, and his reign shall surely bring development, peace and progress to Itsekiri nation,” he said.

In the same vein, platinum governor of Delta State, Senator Dr Ifeanyi Arthur Okowa, appealed to Ogiame Atuwatse III, to extend the olive branch to all and sundry, including the stubborn ones among the people.

“I wish to appeal to HRM Ogiame Atuwatse III, to initiate the process for total reconciliation. Even the stubborn ones among us deserve forgiveness so that we can make progress, not only in Itsekiri nation but in Delta State and by extension, Nigeria,” Okowa said.

In my earlier piece, I posited that royalty is of God and not by choice. And as Christians we are joint heirs with Christ, without recourse to any form of discrimination and that include circumstances of our birth. The holy Bible refers to every born again Christian as a royal priesthood, and that’s why am royalty through Christ Jesus.

Legally, the fundamental rights enshrined in the fourth chapter of the Constitution of the Federal Republic of Nigeria, 1999, as amended, frowns at and abhors discrimination by circumstances of birth, and the Edit of 1979, cannot under any legal interpretation override provisions of our nation’s constitution. To do this, will be to amend Chapter Four of the Constitution.

Even though one or two kings may have emerged through the instrumentality of the Edit of 1979, it appears that Itsekiri nation is now in one accord, and based on popular demand decided to do what is right by piercing the Vail to deal with the gross injustice embedded in that Law.

Once any law is in conflict with any provision in the constitution, it automatically becomes null and void ab-initio, meaning invalid from the day it was made, which is why the obvious discrimination captured in the 1979 Edit shall be beheaded by the sword of justice.

And as we say goodbye to that obnoxious section or clause in the Edit of 1979, which brought about the hullabaloo in recent times in Itsekiri Monarchy, I wish to congratulate the good people of Iwereland for exhibiting uncommon courage by doing the needful.

The coronation process was unique and superlative. The boat regalia and pronouncements made by HRM Ogiame Atuwatse III, both at the coronation and Church Thanksgiving Service attests to a new dawn of peace, progress, unity and prosperity in Itsekiri nation.

I wish to humbly and respectfully join my boss the Governor of Delta State, Senator Dr Ifeanyi Arthur Okowa, Deltans and indeed Nigerians, to congratulate the new royal father of Itsekiri nation world wide, His Royal Majesty, Ogiame Atuwatse III, on the occasion of his successful coronation as the 21st Olu of Warri.

CP Sylvester Alabi: An Example Of A Police Officer Worth Emulating