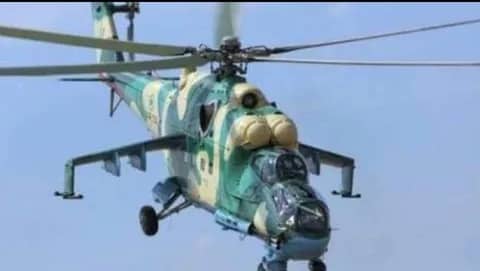 Tragedy struck on Wednesday as a fighter jet operated by the Nigerian Air Force bombed Kunkuna village in the Safana Local Government Area of ​​Katsina State, killing a yet-to-be ascertained number of villagers.

Though details of the incident are still sketchy, it was learnt that the pilots of the military jet “accidentally” hit the wrong coordinates while targeting a camp belonging to bandits in the area.

SaharaReporters called Edward Gabkwet, Air Force spokesman but the calls were not answered nor returned.

On Tuesday, terrorists attacked an advance team in the convoy of President Muhammadu Buhari in Katsina.

Villagers in the past have reported some civilian casualties in aerial bombardments in Northeastern Nigeria.

In 2020, a military jet deployed to repel an attack by Boko Haram dropped a bomb that landed in a compound where civilians were having child christening.

A fighter jet also on a mission against Boko Haram extremists in April 2021 mistakenly bombed men of the Nigerian Army, killing over 20 officers.

The soldiers who were reinforced from Ngandu village were said to be on their way to Mainok, headquarters of the Kaga Local Government Area of Borno state which was under attack by militants from the Islamic State-backed faction of Boko Haram, the Islamic State West Africa Province (ISWAP), formerly known as Jamā’at Ahl as-Sunnah lid-Da’wah wa’l-Jihād.

Some of the Chibok schoolgirls kidnapped by Boko Haram in 2014 and freed last year also said three of their classmates were killed by Air Force bombardments.

In June 2021, an offensive aerial bombardment of the NAF Alpha jet carried out around Genu town in Niger State resulted in the killing of some wedding guests.

In September 2021, about 10 villagers were killed after a military jet bombed a village in the Yunusari Local Government Area of Yobe State.

A few days later, an Air Force jet dropped a bomb on a Nigerian community in the Lake Chad region.

In February 2022, an airstrike by the Nigerian Air Force targeting bandits killed seven children and wounded five others by mistake in the Niger Republic.