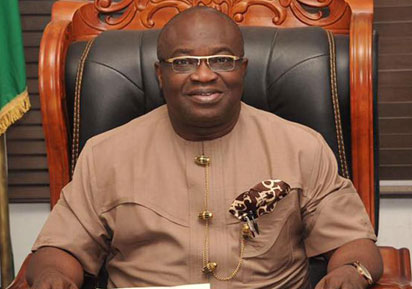 NARD says Governor Okezie Ikpeazu, a former lecturer according to his Wiki citation, had asked the doctors to forfeit the 16-month salary arrears for him to start implementing the new minimum wage for doctors in the state.

The Publicity Secretary of NARD, Dr. Stanley Egbogu, disclosed this while speaking on the just suspended strike embarked on by his association.

Okiyi-Kalu said, “Abia State Government never, at any time, asked any worker to forfeit any earned wage for any reason whatsoever. It will be illegal and morally wrong to do so and Governor Okezie Ikpeazu did not at any time give such directive.”

Recall that members of NARD had, on Monday, September 7, embarked on an indefinite strike, protesting the failure of government to meet the demands they made in June, following a week-long strike action.

On Thursday, NARD said it had suspended its most recent strike for two weeks to allow further negotiations with the Federal Government.

“The Government of Abia State, despite not paying medical doctors the Consolidated Medical Salary Scale, has been owing health workers.

“Currently, the governor is asking them to forfeit the 16-month salaries for him to start implementing the new minimum wage for doctors.

“There is no access road to Abia State University Teaching Hospital as we speak. No form of infrastructural development. The situation in ABSUTH seems to be the worst across the country.

“It is really sad for Dr. Okezie Ikpeazu to treat doctors this way, despite seeing the importance of health when he suffered coronavirus disease,” he said.

Ikpeazu was confirmed to have contracted COVID-19 on June 8, 2020, and was moved to an isolation centre in Lagos. He has since been cured of the infection.

Okiyi-Kalu said, “Abia State Government never, at any time, asked any worker to forfeit any earned wage for any reason whatsoever. It will be illegal and morally wrong to do so and Governor Okezie Ikpeazu did not at any time give such directive.

“From November 2019, we warehoused salary arrears due some parastatals, such as the Hospital Management Board that pays resident doctors and informed them that as soon as the financial fortunes of the state improve, we will start paying the arrears until totally liquidated.

“From November 2019, we took over the payment of HMB staff and have been paying them every month up to June 2020.

“They have July and August 2020 outstanding and the process is ongoing to ensure they receive July arrears next week, while August will follow thereafter.

“It is, therefore, not true that we are not paying them minimum wage or had asked them to forfeit earned wages before receiving minimum wage.

“Non-medical staff of HMB and other medical institutions in the state are receiving the new minimum wage because they are not in the CONMESS category.

“All workers in Abia State Ministries, Departments and Agencies who are directly paid by the state government have been receiving the new minimum wage since January 2020 and they do not have even one month in arrears.

“They have long received August 2020 salary and we are in early September.

“With regard to resident doctors working with the state teaching hospital, they are already on CONMESS, which is above minimum wage and nobody asked them to forfeit any earned wage.

“The state government has continued to pay monthly subventions to the teaching hospital and they are expected to add that to the revenue generated by the hospital to pay salaries and fund operations.”

NARD scribe Dr. Egbogu said the doctors were demanding the provision of genuine group life insurance and death-in-service benefits for all health workers; and immediate payment of the Medical Residency Training funding to all NARD members as approved in the revised 2020 budget.

Other demands include payment of the outstanding April/May and June COVID-19 inducement allowances to all health workers; and the determination of the revised hazard allowance for all health workers as agreed in previous meetings with relevant stakeholders.

He said NARD was also demanding the payment of all arrears owed its members in Federal and states’ tertiary health institutions arising from the consequential adjustment of the national minimum wage, among others.

JOHESU Strike To Commence On Monday

Olu: Itsekiri Nation Made The Right Choice ― Dein of Agbor

Dakukumania: Two Political Gladiators Go for Each Others Jugular