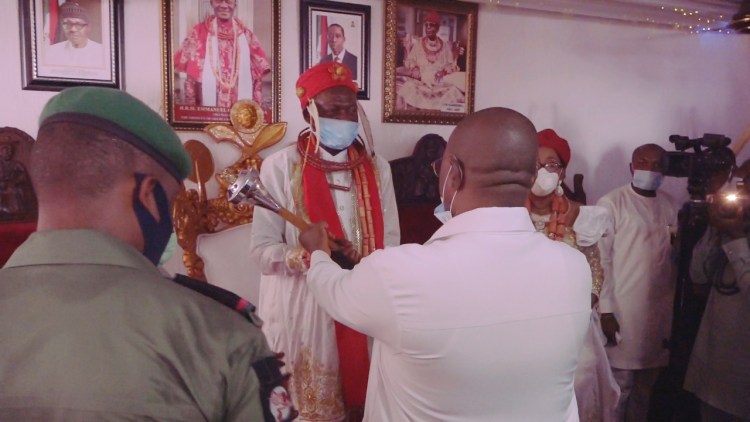 Governor Okowa gave the charge during the presentation of staff of office to the newly installed Okere Urhobo monarch in Warri today.

The governor, who was represented by his deputy, Deacon Kingsley Otuaro, advised that Okumagba II to see his installation as a call to contribute his quota to the development of Okere Urhobo Kingdom, Warri South Local Government Area and Delta State.

While also advising that the traditional ruler should put his wealth of experience to bear in the rulership of the area, Governor Okowa added, “You should promote the interest of Okere Urhobo and culture to the outside world.”

Governor Okowa also urged the new Orosuen to sustain the cordial relationship existing between Okere Urhobo and its neighbours.

He further urged the people of Okere Urhobo to take advantage of being in the heart of Warri metropolis to key into the various Delta State programs to develop themselves and the area.

While maintaining that Delta State Government does not meddle in the selection of traditional rulers in the state, Governor Okowa applauded the people Okere Urhobo for following due process in the selection and crowning of their Orosuen.

He then called on the people to give the necessary support to Okumagba II, to enable him carry out his duties successfully and peacefully.

The event was graced by a galaxy of national and state law makers, the Chairman of Warri Local Council, Dr Michael Tidi, his vice, Chief Ann Divine Iniovosa, top government functionaries, traditional rulers from far and near and clergies, amongst others.

Related Topics:OkowaOkumagba II
Up Next

Egbema Kingdom: Henry Binidodougha Is Not From Any Of The Ruling Houses, Cannot Be King– Council Of Chiefs

JUST IN: No Eviction Order To Herdsmen In South West, Says Governors