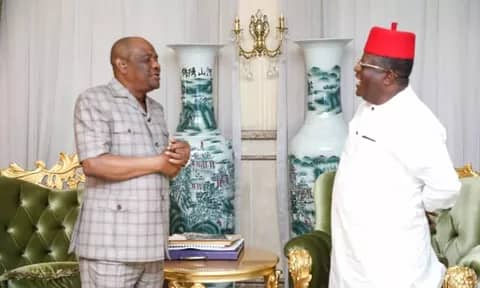 The Governor of Ebonyi State, David Umahi on Tuesday visited his counterpart, the Rivers State Governor, Nyesom Wike at his residence in Port Harcourt.

Naija News had earlier reported that Umahi was in Rivers State to commission a road project carried out by the Wike-led government.

Umahi while speaking on the fight for justice by Governor Wike and his allies identified as the G-5 said their fight is not personal.

The Ebonyi State Governor noted that the G-5 members are fighting to keep the country together, adding that God is with them and he has Wike and his allies back.

Umahi noted that there was a G-4 before which had him (Umahi), the Zamfara State Governor, Matawalle, and Cross Rivers Governor, Ben Ayade as members before Wike removed them.

Umahi further stated that many other Governors are interested in the integrity group of the aggrieved Peoples Democratic Party (PDP) governors.

He took the opportunity to solicit support for the presidential ambition of the All Progressives Congress presidential candidate, Bola Tinubu in the forthcoming election.