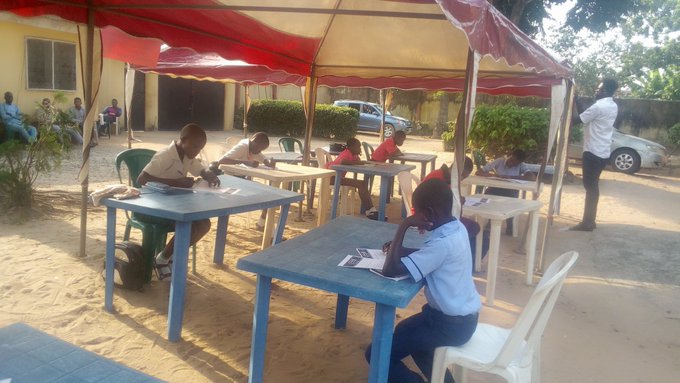 In line with the aims and objectives of the Adakaji 1 Royal Foundation to enhance educational standards among orphans and youths, the foundation will be presenting cash prizes as scholarship awards to three students in Abraka.

On Monday, 17th December, 2019, the Education Committee formed by the Foundation organised an essay competition for SS 1 srudents in Abraka at Adakaji’s palace, and a total of 5 schools of the 10 invited participated.

According to the organisers, the best three performing students will be given scholarship for one year, adding that “it is the Foundation’s wish to make it an annual event to commemorate the memory of HRM I.E. Ejohwomu.”

Present at the venue for the examination to select the best three students for the cash awards were the Co-ordinator, HRM Elizabeth Ejohwomu, Oniemo of Abraka Kingdom; Chairman, Dr. (Mrs.) Mary Aburime; Public Relations Officer (PRO), Sir I.J. Imene and Chief A. Lynn Eruwe and teachers from the participating schools accompanying their students.

The winners will be announced and presented their prizes on the 23rd of December, 2019 at Adakaji’s palace during a Christmas carol of nine lessons for charity programme organized by the Foundation.

At the said event, the educational/scholarship scheme to enhance educational education amongst orphans will also be launched.

Last year, the Foundation organized a free medical outreach for over 200 persons in Abraka.