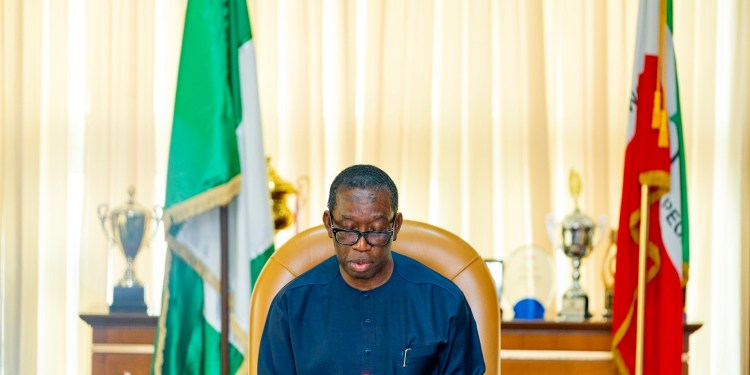 Ohwoekvwo represents Ughelli North I Constituency, while Obuseh represents Ika South constituency as members were drawn from the 29 constituencies in the state.

The governor, represented by his Senior Political Adviser, Mr Funkekeme Solomon performed the function on Tuesday at the State House of Assembly Complex in Asaba.

The speaker’s nomination was seconded by the member representing Warri South II Constituency in the parliament, Mr Oghenetejiri Eminokanju.

Okowa congratulated the parliament and charged them to continue to promote peace and unity across the state and country at large.

But, in a swift reaction, a student leader and popular activist in the state, DIO, Oghale Emeka Rex, has described the selection process as fraudulent.

In a press statement, Rex alleged that the “Delta State Youth Assembly is a misplaced priority,” adding that what played out during the said election was “a show of shame by Delta Lawmakers and the Youths Commissioner, Comr. Ifeanyi Michael Egwunyenga.”

He said: “It is so shameful and pathetic how Delta lawmakers could stoop so low just to hijack the Delta Youths Parliament and turn it to an empowerment program for their loyalists. The Delta State youth parliament which was established by the ministry for youths development about four months ago will not see the light of the day as the whole process has been hijacked, bastardized and politicized.

“It is so unfortunate that after stating that the age bracket for qualification was 18-26years old, we still have youths above 28 years inaugurated as members of the parliament. It’s sad to also note that the foundation process of the supposed youths assembly is faulty and will not whole any water as we the Delta youths will surely revolt against this ungodly act.

“The basis of selection wasn’t on merit rather was given as slot to members of the Delta State House of Assembly after teeming young Deltans has shown interest and participated in the examination and screening process.”

He added: “The Governor of Delta state should as matter of urgency call to order the Hon Commissioner for Youths Development as no one is more Deltan than the other.

“The formation of the youths parliament is in consonance with the United Nations charter on youths development and in pursuant of the resolutions of the Commonwealth heads of government meeting in 2005,” adding that with what played out in Delta, the purpose has been defeated.

“We the youths are the voice of the society and as leaders of tomorrow all we need is a strong representation not a puppet or a political stooge. It is high time the appointees of the government and house members understand that politics must not be played in everything; you cannot give us a representative rather we should vote for ourselves who will represent us,” he stated.

According to him, “the Hon Commissioner for youths development has failed the entire youths in Delta State and this shenanigan and purported parliament will not stand.”

Speaking further, he said: “The Hon commissioner and his cotravelers should be called to order by the executive governor; the youths parliament should be reviewed as we demand to see a transparent process and scores of those who participated in the examination.”

Rex said that if the issue is not addressed, “he will mobilise youths in the state that do not have a political godfather to demand for the removal of the Hon Commissioner for Youth Development and also create a parallel youth parliament.”

Related Topics:DeltaYouths Parliament
Up Next

Buhari: My Adminstration Has Done More With Fewer Resources