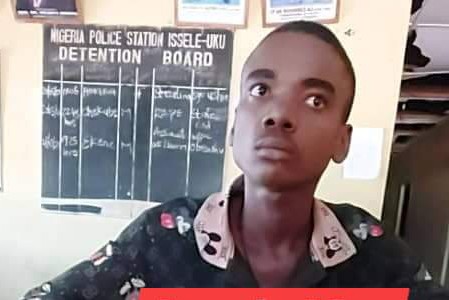 …Says, 6 Others Still At Large

One of the culprits that allegedly gang raped a girl of 14 years at Issele-Uku in Delta State, has been arrested by the police.

The alleged rapist named Chekwube a.k.a Jungle Boy was arrested on Friday at his hideout in Issele-Uku and was immediately taken to the State Criminal Investigation and Intelligence Department for questioning.

Meanwhile, the remaining six boys are still at large and are being trailed by the police.

The Acting Police Public Relations Officer, DSP Edafe Bright confirmed the arrest to newsmen, adding that the suspect is with them at the State Command.

He said if all things being equal with the news of the resumption of courts, the boy would be charged immediately along others at large.

Mr. Edafe added that if it turns out that the judiciary workers are yet to resume, the suspect would still be with us because his offence is not a bailable one.

The PPRO assured that the culprit would be prosecuted accordingly and that efforts are being intensified by the police to arrest the remaining suspects based on high expectation of the public on the matter.

This medium can authoritatively report that the victim had been discharged from the hospital while plans are being put in place to commence healing therapy on her.

Gunmen Yet To Contact Family, 5 Days After Abducting 92-Year-Old Paramount Ruler In Rivers

BREAKING: US Court Orders FBI To Arrest Abba Kyari Over Connection To Hushpuppi

2023 Guber: Zoning In Delta PDP, Based On Senatorial District, Not Ethnicity —Okowa Commissioner