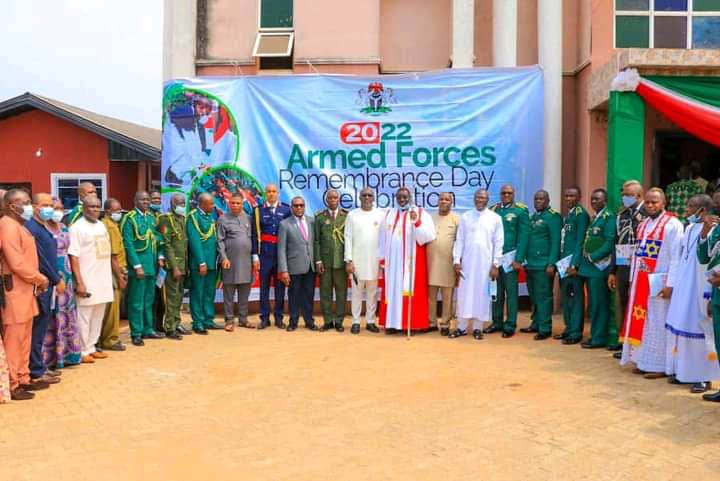 A thanksgiving service to mark the 2022 Armed Forces Remembrance Day has been held in Asaba with a charge on Nigerians to renew their spirit of brotherhood, love and peaceful co-existence for the progress of the nation.
The Governor of Delta State, Senator (Dr.) Ifeanyi Okowa, gave the charge yesterday during the service held at the Very Reverend Omeni Methodist Church, Asaba.

The Governor, who was represented by the Secretary to the State Government (SSG), Chief Patrick Ukah, said the 2022 Armed Forces Remembrance Day Celebration Interdenominational Thanksgiving Service was to appreciate God for the courage of members of the nation’s armed forces who died or were maimed while fighting in various wars or engaged in peace keeping missions so that the country will be united.

He commended the various security agencies for working to sustain the existing peace in the state and called for support for them.
He urged citizens to work for the progress of the nation as the development of any nation was the collective responsibility of leaders and citizens.

ALSO READ: Bozimo, Blazing The Trail In The Temple Of Justice

Earlier, the Bishop, Diocese of Edo and Delta, Rt. Rev. Dr. Rufus Babalola, in a sermon taken from the book of 2Chronicle Chapter 7:12, Proverbs Chapter 14:24 and Exodus Chapter 22:22-24, urged Christians to remain prayerful and put their trust in God no matter the challenges they face.

He commended members of the nation’s armed forces who sacrificed their lives for the peace and unity of the country and prayed God to bless and support the families they left behind so that their labour would not be in vain.

The service was attended by some top government functionaries and featured special thanksgiving and prayers for the country, state and armed forces, among others.