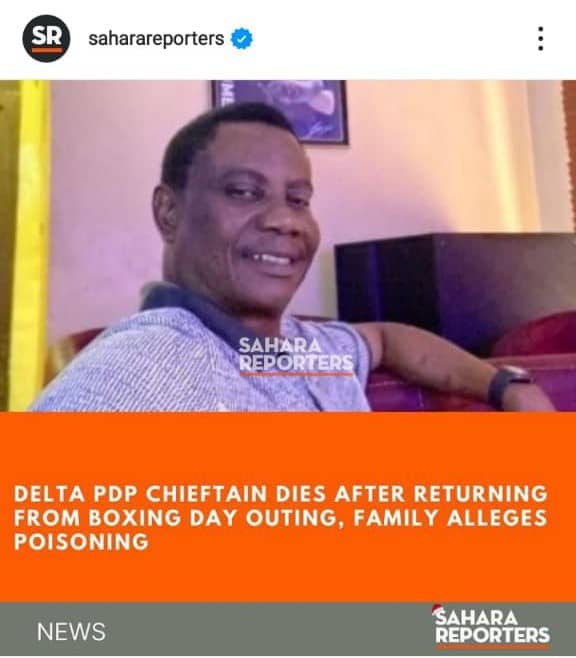 SA to Governor Ifeanyi Okowa on Community Development and former Chairman, Ethiope East Local Government Area, Chief (Dr.) Kingsley Okpako (popularly known as Kuti), has reacted to the use of his picture by Sahara Reporters for the story on the death of a ward chairman in the state, Peter Agboghoroma.

In a phone conversation with Oasis Magazine, a furious Dr. Okpako, wondered why a big media brand could make such fatal error.

Continuing, he vowed to get to the root of the matter, just as he said that the use of his picture for the story fits into a case of defamation too.

According to him, “the act is mischievous and a desecration of the high profession of journalism.”

He added: “Could it be deliberate? Is someone trying to mock me? I am alive why are they identifying me with someone that is dead?”
ALSO READ: Justice Ministry Staff Celebrate Bozimo, Describe Him As Dependable, Industrious
Continuing, he disclosed that he has since contacted his lawyer, but advised Sahara Reporters to remove his picture from that story immediately to avoid a court case.

“Its very embarrassing. I have received calls from all over the world about the said publication. If they don’t act fast, they will hear from me soon,” he added.

At the time of filing this report, other media houses also used same story with Dr. Okpako’s picture.

We Are Not Owing Salary Arrears – Oyetola’s Aide