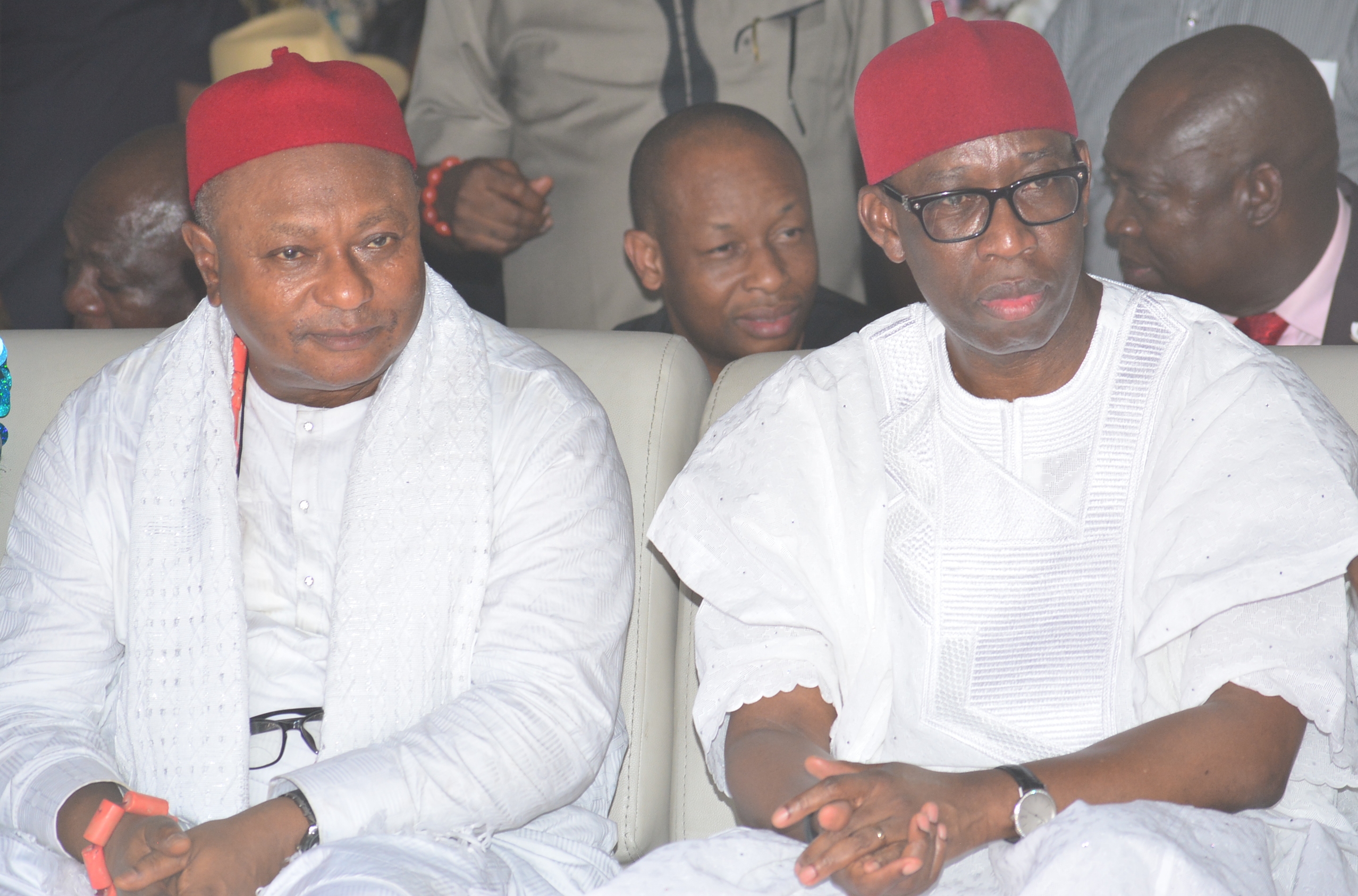 By Daniel Dafe
The university town of Abraka in Ethiope East Local Government Area of Delta State, today, Sunday, 26th February, 2020, was agog as Professor Andy Egwunyenga, thanked God over his emergence as the Vice Chancellor of Delta State University, Abraka, as the State Governor, Senator Dr. Ifeanyi Okowa graced the event.
Egwunyenga took over as the 7th Vice Chancellor of the institution from Professor Victor Peretomode on the 1st of December, 2019.
A mammoth crowd thronged St. Paul’s Catholic Church in Site II, the venue for the occasion and thereafter the Convocation Arena in Site III of the campus for the reception.
Dignitaries that graced the ceremony include: Rt. Hon. Sheriff Oborevwori, Speaker, Delta State House of Assembly (DTHA), Hon. Pat Ajudua, Chief Whip, DTHA, Prof. Sam Oyovbaire, Chairman, Governing Council, DELSU, Abraka, Chief Fidelis Tilije, Commissioner for Finance, Prof. Patrick Muoboghare, Commissioner for Higher Education, Olorogun Arthur Akpowowo, Commissioner for Urban Renewal and Mr. Patrick Ukah, Commissioner for Basic Education.
Others are Dr. (Mrs.) Esther Uduehi, O.C. Majoroh and Chief Benard Edewor, Leader, People’s Democratic Party, Ethiope East.
Some of the traditional rulers present at the event are HRM Dr. Emmanuel Efeizomor II JP OON, Obi of Owa and Chairman, Delta State Traditional Rulers’ Council, HRM Akpomeyoma Majoroh Ojeta II, Ovie of Oruarivie Abraka Kingdom, Orodje of Okpe, Orue I, represented by Prof. (Chief) Emmanuel Oyibo, HRM Ambassador Donald Ejechi Ekeruche, the Ebu of Umuebu Kingdom, Obi Prof. L.C. Nwoboshi, Obuzor of Igbuzor, Obi Chukwumalieze, Obi of Onicha-Ugbo, Obi Kikachukwu, Obi of Ubulu-nor and HRM Paul Ifeneziuche, the Igwete of Amai Kingdom
In his address, Professor Egwunyenga, said that he was overwhelmed with joy, seeing the large turnout of persons that came out to join him in appreciating God over the smooth takeoff of his administration.
He added: “Seeing all past Vice Chancellors here and the crowd from the university environment attests to the fact that I will enjoy the support of stakeholders in DELSU. I promise not to disappoint all those that have high hopes in my capacity to deliver.”
While promising to promote peace in the university, Egwunyenga assured the staff and students of the university that he will be guided by the laws of DELSU and vowed to embrace best practices that will move the tertiary institution forward.
Meanwhile, Sen. Okowa, charged the VC to look into ways of considering paying attention to courses that are focused on Information Technology.
Furthermore, he assured the new management of the state government’s willingness to partner with the new administration to help actualize his dreams for the university.
“It’s a daunting challenge, but I am sure that you will do well as VC,” Okowa averred.
On his part, Oyovbaire said that he has witnessed similar occasions before but that today’s occasion was unique in every way.
He opined that the screening process that produced Egwunyenga as VC was not marred by controversies like previous ones.
Speaking further, he said that he was sure that the new VC will do the university proud, saying that during the screening process Egwunyenga’s vision for the university made him excel.