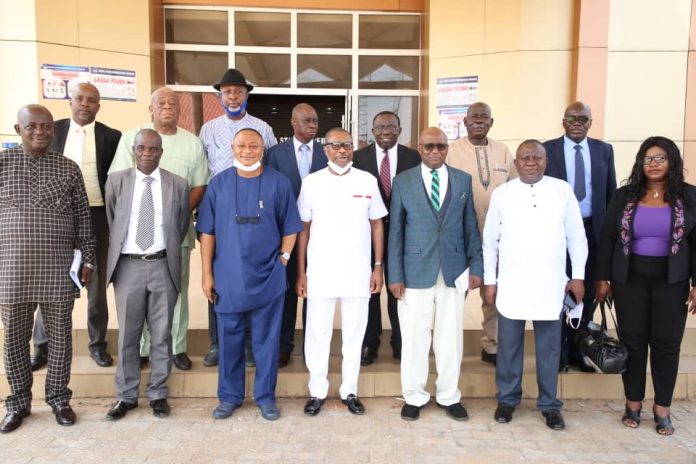 The Vice Chancellor of the Delta State University (DELSU), Abraka, Professor Andy Egwuyenga, has commended the Delta State Government for paying special attention to the needs of the State owned University as well as enthroning stability in the tertiary institution.

The Storyng reoorts that Professor Egwuyenga said this on Wednesday when he led other Principal Officers of the institution on a courtesy visit on the State Head of Service, Mr. Reginald Bayoko, mni in Asaba.

The Vice Chancellor who said that the school has resumed academic activities and was not part of the just suspended industrial action embarked upon by the the Academic Staff Union of Nigerian Universities (ASUU), disclosed that the Delta State Government has since met some of the demands that necessitated the strike action and enjoined the state government to sustain its efforts in stabilizing the institution.

While commending government for its huge investment in the school, the VC disclosed that the three campuses of the University will be transformed and modernized to be one of the best in Nigeria to justify the massive investment of government in the institution.

Prof. Egwuyenga who also paid glowing accolades on the Governor and Visitor to the University for approving the integration of the School into the state central payroll system as well as the Governor’s approval for the payment of the new minimum wage to the university workers, solicited for the assistance of the Head of Service for an expeditious implementation of the new minimum wage to avert a notice of an impending industrial action.

Meanwhile, the State Head of Service, Mr. Reginald Bayoko has commended the State owned University, DELSU for not joining the just suspended national industrial strike by ASUU that lasted for months.

Bayoko who was quick to add that DELSU not being part of the suspended strike to show solidarity was not because it did not believe in the Union’s legitimate demands from government but since the Delta State government has been proactive enough to have met some of the demands by the Union.

The Head of Service while extolling the VC for the robust relationship that exist between the school and the government, stressed the need for a sustained synergy even as he expressed the full cooperation of his office towards the seamless implementation of the new minimum wage for the university workers.

Bayoko who saluted Governor Okowa for his giant strides in the education sector and other sectors of the state economy, described the governor as an ‘All Round Master’ and urged the Vice Chancellor to carry out his assignment in the overriding interest of the institution.

Apostle Moses Grandeur: “He Slipped Out Of Time Into Eternity” -Son

Waive Reacts To Death Of Apostle Moses Grandeur, Says “It Is Sad He Left So Soon”