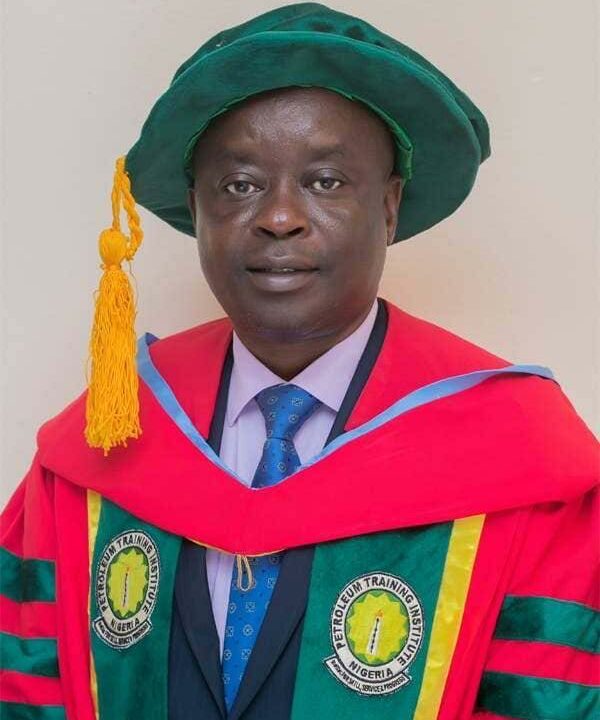 Dr Henry Adimula, the Principal /Chief Executive Officer of PTI in his welcome address during the ceremony thanked Directors of the lnstitute, Members of the Academic Board , Management and Staff , Out – going SUG / SRC Executives, the newly elected Exco and all dignitaries who came to attend the swearing – in ceremony of the
2021/2022 Academic Session of PTI Students ‘ Union Government .

The PTI Chief Executive Officer stated that the election which was conducted on Saturday , 23rd November , 2021 , witnessed students ‘ who congregated in large numbers to vote candidates of their choice which saw both the emergence of winners and losers

Dr Henry Adimula who commended the students for sustaining
democratic principles on campus also appreciated the Independent Students ‘ Electoral Committee ( ISEC ) , the Students ‘ Affairs Officer and his staff for conducting a free , fair and credible election .

Dr Adimula noted that from the results declared, the President elect polled 68 % of the total votes cast Which according to him is a clear indication that the new President and his Exco are widely accepted by the students of the Institute, adding that the result of the election is a true reflection of the students ‘ voice .

While giving his counsel as a father to all in the Academic Community, Dr Adimula observed : “I wish to advice the winners to extend the olive branch to all who contested the election in order to work as a team so as to achieve the goals and objectives of the Institute.”

The Academic Don pointed out that as elected officers , the new members of the SUG are now saddled with an uphill task of trust , therefore , he urged the student union leadership to at all times represent those who elected them and to also bear in mind that their position as elected officers does not in any way elevate them above any student and on no account , should the privilege be used for self – aggrandizement .

Continuing , he added: ‘ I charge you to exhibit high sense of maturity and carry along the entire Students devoid of ethnicity , religion and discrimination , bearing in mind that discipline and unity are prerequisite for a successful tenure .”

Adimula who emphasized the need for the SUG Members not be distracted advised thus: ” Please endeavour to stay focused and purposeful , not allowing your ranks to be infiltrated by internal and external forces of strife to destabilize the Institute’s academic activities . ”

He emphasized saying: “It is my hope that you will pursue creative and innovative programmes that will promote Academic and Social Activities on campus such as periodic organization of seminars and workshops , sporting activities , and join hands with Management to fight cultism , academic corruption and other social vices headlong . ”

The PTI CEO who Pledged the cooperation and total support of the lnstitute to the SUG remarked : “Management on its part , will not relent in its determination to provide and continue to upgrade facilities in the Institute that will create an enabling environment which will facilitate teaching and learning .”

While stressing the need for the SUG to be good interface between Management and the Students, the PTl Chief Executive Officer said;
” Please inform your members to always imbibe the maintenance culture of these facilities and be partners with Management in its bid to achieve the dreams of its founding fathers of moving the Institute to the next level of training competent technical manpower for the oil and gas sector .”

Adimula who admitted that Management is aware of some challenges students are facing on campus , Promised to put in place machineries and programs that will systematically address these challenges.

He emphasized in his address that the students body can be restassured
that Management in its relationship with SUG and SRC will always be disposed to dialogue on issues that will improve Students Welfare and as such, it is expected that as the eye of the students’ , SUG should reciprocate Management’s gesture by embracing dialogue rather than confrontations or protests.

Adimula in his summàtion said:
“Finally,You should shun every form of social vices and discourage violence among fellow Students on campus. “Violence they say, never builds, it only destroys”. If you take the oath of office today, remember to always abide by it. Once again, congratulations on your victory at the polls. On behalf of Management and Staff, I wish you a splendid 2021/2022 tenure. ”

The newly elected President of the PTI
Student Union Government ( SUG)
Comrade Esharedoro Christian Efe who spoke on behalf of the Exco in his acceptance/ inaugural speech appreciated the Principal/ Chief Executive Officer( CEO) of the Institute, Dr Henry Adimula, the Directors, Academic Board Members, Management and Staff ,
especially the Independent Students’ Electoral Committee (ISEC) and the Students Affairs Division for conducting a free, fair and credible election which ushered in the new executives who emerged victorious at the polls.

Comrade Esharedoro , the new PTI Student Union boss also extended his heartfelt appreciation to his fellow students who unanimously gave him 68% of the total votes cast, a phenomenon which he described as a a strong affirmation that he and the new Exço are widely accepted by all the students.

Speaking further, he declared a Policy statement saying: “As we mark the beginning of a new tenure, I want to seize this opportunity to register my Zero Protest Agenda ( ZPA) for the next Academic Session which will be achievable if the Management is ready and willing to create a formidable bond with the students community by creating an enabling environment
which will advance the welfare and academic performance of students.”

Comrade Esharedoro the PTI SUG President in his speech affirmed that for considering him Worthy, to lead the Students Union, he will consolidate on the mandate given to him by putting up a robust interface Which will ensure that the voice of the student body is loudly heard on campus.

The PTI SUG boss assured the academic Community that ,together with his Exco, they will do their very best to use the instruments of their good office to .manage the affairs of the Union in line with the bye laws guiding the student body.

Comrade Esharedoro who emphasized the need to be magnanimous in Victory said :” Now that the election is over ,we must avoid the practice of the winner takes it all, by embracing the spirit of sportsmanship.”

Continuing, he added: “l hereby extend the olive branch and my hand of fellowship as I invite our colleagues Who contested with us to feel very free to come on board and join hands with the new Exco to build a more vibrant student Union for the great and unique Petroleum Training Institute PTI Effurun, Warri Delta State.”

Conclusively he said : ” I look forward to working with the Management in representing the PTI students community and to my fellow students be rest assured that your interest is in safe hands.”