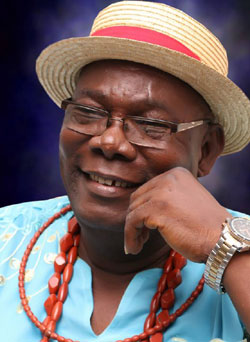 Speaking to journalists in Mosogar recently,  he stressed that his election since December till date was not challenged in any court by any individual or group because they have no ground to.

He quizzed: “You can have an Ibo man given birth to in Urhobo land preside over your national union, but not me?”

He continued: “I have gone back to court again, since he has nothing to file as his reason for libeling me. Has he been able to run his Ukoko ‘R Ivie? The past Chairmen of this great Urhobo organization ran it to the admiration of all Urhobos. Even when there was UPU crises during the time of the Ovie of Ughelli, it was still resolved to the admiration of the entire Urhobo people. That is how you know a good king.”

He added: “All the branches of UPU in Nigeria, Africa, Europe, Asia and the Americas except UPU USA that was suspended two years ago are working with us.”

He said further: “Anybody can deceive some Urhobo people with University and another Dubai in Urhoboland. Did they not make such promise to build a University In Olomu? I heard that the University won’t be in Uvwiamuge again.

“The fencing of Uvwiamuge for which I led UPU to discuss with Chief Makinde Williams, MD of Desopadec last year, which led to its addition to the budget, is now their achievement. Do they know when we put it in the budget?”

“Can any government use some kings to forcefully install his agent with over 600 police officers and others to replace an elected UPU PG simply because they want a smooth sail in the next election?”

“”My election had delegates from all over the branches world wide participating. In the other one, only invited guests, and the 600 police men, participated. In mine, the government used policewomen and thugs to drive us from Uvwiamuge venue. All delegates went to Okere Rd branch but we were also pursued and driven from a house built by UPU. Because delegates came from far and near, they were now directed to Mosogar. People who complain of Mosogar don’t bother to ask why were Urhobos being driven away by the PDP government from their own home? Tell me one ethnic nation in Nigeria that their kings conduct its Union for? Read UPU constitution carefully so that you can be wiser. If in doubt as to whether it was signed, ask Chief Barr. Otomiewor ,” he argued.

Omene wondered why the Ohworode of  Olomu was yet to file his statement of defense in the 1.0 billion Naira libel suit filed against him (the Ohworode), berating the Ovie for alleging that he collected 1.2 billion Naira from former President Jonathan.
Omene said further: “If he has respect for the judiciary, why will he make such an unguarded statement when the matter is in court. In the case of UPU, why has he and Chief Moses Taiga not been able to file their statements of defense since February 2, 2017? Any person can be loud mouthed the truth will prevail.”

Speaking Up When It Matters: Sterling Representation Of Sen. Ovie Omo-Agege